With polls being so close in this election, many things can change the course of the outcome. One of these things is the weather. Turnout is influenced disproportionately by bad weather, and it can be argued that this has changed the result of a Presidential election at least once in the past. So does weather affect results?

There was a study in 2007 that showed that there was a correlation between bad weather and the respective turnouts of Republican and Democrat voters. The study found that an inch of rain reduces participation by 1%, where an inch of snow reduces it by 5%.
While this doesn’t seem like a lot, it might just matter in an election with a close result. Thomas Hansard, one of the authors of the study, suggests the weather in Florida may have changed the Gore/Bush result in 2000.

Is this just the USA?

Another study showed that the same effect in the Netherlands, with wet weather helping right-wing candidates and parties. The effect has been seen in Germany and the UK too, but in Sweden, weather is shown to have no influence one way or another.

What is the weather for the Election?

So what is the weather for the election? Most of the country has pretty good weather for Tuesday. Texas, Louisiana, Mississippi, Arkansas and Oklahoma may all see deluges of bad weather today according to Accuweather. 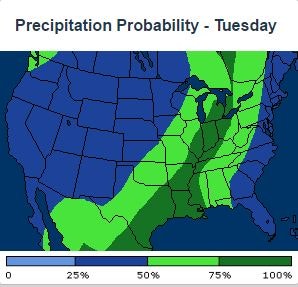 Although none of these are battleground states, the Republican majority will only be increased in those states with rain. The reverse is true too, with good weather helping Democrats and this should help Clinton in the swing states. According to Politico these are: Florida, Colorado, Iowa, Michigan, Nevada, New Hampshire, North Carolina, Ohio, Pennsylvania, Virginia and Wisconsin. So all eyes should be on Iowa and Ohio who are polling towards voting for Trump.

What other factors are there?

A larger proportion of retired people tend to vote Republican, and the turnout for retirees is consistently high. This is important as the vote is on a Tuesday – a work day. This means that people may not find the time to vote if they work, and this is emphasized by bad weather. Retirees don’t have this worry.
Bad weather can mean bad traffic. All of these things contribute to the likelihood that someone won’t vote.
The effect of weather may be reduced by the early voting that now takes place, and while the effect is small, it may be important.
https://giphy.com/gifs/studiosoriginals-i-voted-3oEjHGDzOzY6WnnCik

Whichever party you choose to vote for, please get out there and vote.